Alone in the bush, with no social life and nowhere to go? Definitely not. This place, like everywhere else, has special events where you get to mix with the who’s who of the ‘hood.

The Parque Nacional do Limpopo where I live is open around its perimeter, except on its western boundary where it borders onto SA’s Kruger National Park. That fence is open in a number of places too, preliminary to dropping it altogether when the two parks will ultimately combine to form the massive Greater Limpopo Transfrontier Park. But before that can happen the eastern side has to be fenced. This process has now finally kicked off and a contractor has moved in to clear a strip through the bush and erect the first 56km of heavy, elephant-proof game fence. 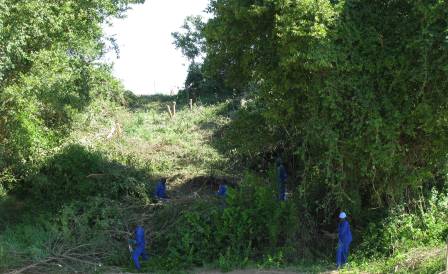 Before anything can be put in the ground however, there is a specific custom that must be adhered to: There has to be a ceremony to honour and appease the ancestors and to get their blessing . This important event is happening today.

I’m up early and get ready to be picked up by the limo. After a short wait I hear its engines and watch as it comes into view and banks towards my little bush strip. Just then a waterbuck bull steps out on to the runway (from where I have just chased a herd of impala). With one eye on the plane I race the Nissan down the strip again, shoo the buck away, and park at Drop off ‘n Go at the end. Steph pulls up, cuts a motor, and I hop aboard. He has a problem with the flaps but we manage to get out of the tight strip nonetheless and head for the town of Massingir. 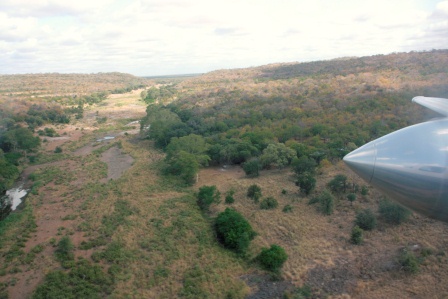 Flying over the Massingir dam on the Olifants river.

At Massingir two boys and a dog flee the crumbling, overgrown runway as we touch down. There’s a vehicle waiting, as well as guards for the plane. Forty-five minutes later, after a bumpy, branch-ducking ride along a bush track on the back of a bakkie, we arrive at the event.

The venue is a designated jackalberry tree on the edge of a cornfield shamba. The assembled guests consist of a few officials, the contractors, a TV crew and the folks of the local Mahlahule community. Like most do’s it’s a bit of a stiff affair initially. When things get underway a few speeches are made, a goat and a chicken are killed, a bit of snuff is rubbed on the tree, wine is sprinkled on the ground and some chants are repeated. There’s also an indaba to clear up any misunderstandings about which tree is inside the coming line and which is out, and then it’s time for the party. A few of the folks do a shuffle in the long grass but it’s really the wine and the pap and the cooked meat of the goat that it’s all about. A good time is soon had by all under the jackalberry.

Different to the social events I’m used to? Nay – same thing. A few formalities and customary procedures, and then everyone gets on with being happy. The only difference is that here no-one has to clean the hall afterwards. 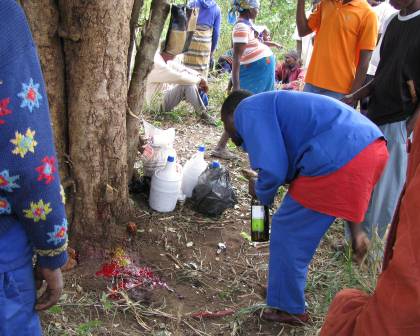 Chef Andres Mahlahule sprinkling wine as part of the ceremony 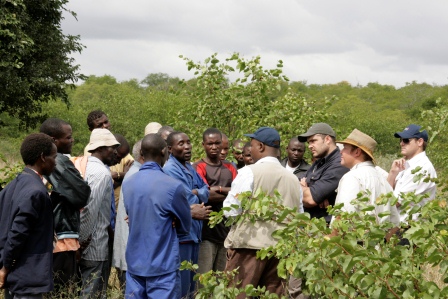 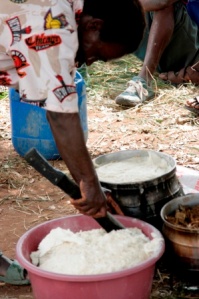 Simao Mucar, peacekeeping officer of the community, starts dishing up 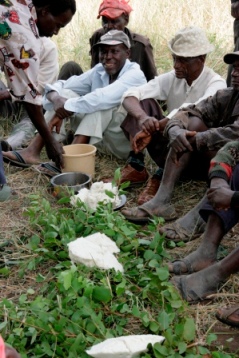 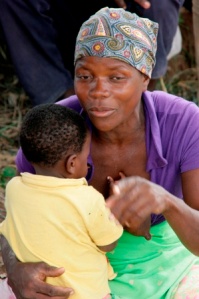 4 thoughts on “a social event”